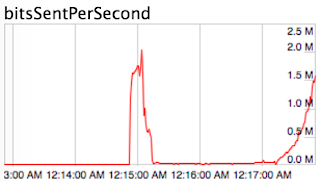 Bandwidth estimation is probably the most critical component in the video engine of WebRTC. The bandwidth estimation (BWE) module is responsible for deciding how much video* traffic you can send without congesting the network to prevent degradation of the video quality.

Modern bandwidth estimation algorithms are more advanced and try to detect congestion before it is bad enough to make routers discard packets. These algorithms predicts congestion analyzing the delay between packets. The idea is that when you start having some congestion, the buffers in the routers will start filling and the delay will be more va…
Read more

October 25, 2017
When we talk about the applications of Artificial Intelligence / Machine Learning (AI/ML) for Real Time Communications (RTC) we can group them in two different planes:
Service Level: There are many features that can be added to a videoconference service, for example identification of the participants, augmented reality, emotion detection, speech transcription or audio translation.  These features are usually based on image and speech recognition and language processing.Infrastructure Level: There are many ways to apply ML that do not provide new features but improve the quality and/or reliability of the audio/video transmission.
Read more